So you have the rule, you have the words, let’s talk biological psychology for both men and women. It’s different for men and women but it does have cross over for both genders. There is a general psychological “normal” associated with both male and female readers. Then you have the general psychology of transgender, gay, lesbian but let’s start with your generic male and female because that’s the biggest niche of the market for erotica writing (it shouldn’t be but it is, although gay and lesbian erotica is on the rise, so is trans erotica and about damn time it is).

So for women, what is it that turns a woman on? Depends on the woman is the roundabout answer. However, most women, in general, like to be touched, feel safe with their partner, listened to, heard (wait, Sheal you said that twice, uhm no I didn’t listen and hear are two different things folks). Soft, wispy caresses at the hip, thigh, down the back…hmm mmm… you’ve got her eating out of your palm. Caresses don’t necessarily mean with your hands either. Mouth, tongue, penis…now she’s yours fully.

For a man, depends again however, a man might tell you a firm grip and a soft mouth drives them wild. They like to be spoken to, shown they are wanted, and desired. A half moan, half-whisper of “you feel so good inside me” will drive a man to wild rapture, he’s eating out of YOUR palm now…give me you seed, begging for it, asking for release, actively humping at his thrusts and not starfishing him…now he’s fully yours.

For both, playing with their mind is the overlap between the main genders (did you know they now say that there are currently 112 gender descriptions and accepted definitions? Did you know there is genetic evidence of transgendered folks?). How do you play with the mind you ask? It’s called the lead-up, most of us actually call it foreplay and it’s only a part of foreplay. Ever hear of the saying “anticipation of a thing is worse than the thing itself”? That saying doesn’t only apply to bad things happening or perceived bad things, that anticipation can be a good thing too. Here, let me show you:

He pulled her where she was back to belly with him and reached around, turning her head so he could kiss her from behind. His kisses sent shivers through Janie’s whole body, making her moan uncontrollably into his mouth which made him moan back thickly and thrust his hips against her bottom. Her back arched as he ran his hands over her breasts. He broke the kiss and turned her around gently. Staring into her eyes Caleb kissed her again, more passionately without breaking eye contact. Janie ran her hands down his abs and over the straining bulge between his thighs, he moaned in response to her touch and pressed himself against her hand eagerly, demanding.

She undid his belt buckle and unzipped his jeans, reached in and stroked him making him roll his head back, breaking the kiss. Caleb groaned and she whimpered softly at his aroused sounds of lust and her own growing, wetness. He watched her intently as he guided his cock out of his jeans and fully into her eager roaming hands. Unbuttoning her shorts, he slid his fingers into her panties and caressed her heated, wet pussy with gentle strokes of his finger tips. Janie’s hips bucked against his fingers as she experienced a tingling warmth that spread through her entire body from tip of toes to top of her head, she looked at him questioningly and shyly. Caleb smiled softly and nodded, she had experienced her first real orgasm and it was lusciously wonderful. Caleb pulled gently at her directing her towards his bedroom. When they got to the door he pulled off her shorts and tank top slowly and sensually, kissing her everywhere as he did. He crouched as he pulled her panties off kissing at her thighs gently.

Janie watched him kissing her and moaned. His cock quivered as he stood up and opened the door to his bedroom. He led her onto the bed, naked as the day she was born. Laying her down, Caleb trailed a path of hot kisses all over her, all the way down to her inner thighs. He lapped softly at her pussy, gently parting the lips with his mouth. Caleb ran his tongue slowly over the pink, hot and spread open flesh making Janie moan and spread her legs wider to offer herself more fully to him. Caleb’s hands gripped her hips a little more tightly in response to his rising arousal of her offering herself fully to his roving mouth. His tongue lapped more feverishly at her and he sucked her aroused clit into his mouth. Janie rolled her hips back and forth meet his mouth half way, bucking her hips hard against his lapping tongue. Janie moaned his name as the intense contractions of orgasm ripped through her body making her legs shake. He moaned with the sound of her calling out his name in a fit of passion and lapped every last sweet drop of her climax from her.

Caleb gasped softly for air as he came up from her to catch his breath. Janie gazed at him lustfully and rolled the both of them over, putting Caleb on his back. She pulled his shirt off of him then stripped both his jeans and briefs off. She stared shyly at his throbbing erection. Marveling at the well sized cock he had and how it quivered in front of her. Janie smiled sweetly as she looked into his eyes and lay on her belly with her face only inches from his erection. He watched her as she began to kiss the already throbbing head with fervor. Then Janie lapped at him causing his hips to buck and him to moan in ecstasy. She licked up and down his shaft slowly, teasing him and Caleb moaned begging for her to stop teasing him. Janie whimpered with excitement and engulfed his hard, throbbing cock, devouring it to the hilt. Caleb threw his head back and cried out loudly. As her mouth ran from tip to base of his shaft he tangled his fingers in her red, beautiful curls and thrust his hips in unison with her mouth.

Faster and faster their passionate dance continued, her mouth running along his shaft and his hips thrusting forward until Caleb’s back arched, his abs tightened and his hips gave a last final hard thrust forward. Caleb groaned as he felt his aching erection release his seed deep into Janie’s passionate mouth. Janie swallowed hungrily at Caleb’s spent seed in her mouth, moaning against the flesh of his shaft. She kept sucking gently, getting as much of his sweet tasting seed as she could until Caleb had to pull her off of his still throbbing and very hard erection. Janie gasped at the sight of him and Caleb just smiled at her. He rolled her over on her back and gently parted her thighs with his. Caleb guided his cock gently against her virgin flesh. He pressed softly, not wanting to hurt her. Janie put her hands on his shoulders and winced. It hurt a little, Caleb paused and looked at her. Janie smiled and nodded as she wrapped her legs around his waist, pulling him to her. With a quick, hard thrust Caleb penetrated her for the first time. He slowly drew back the moved his hips forward with a soft and tender thrust.

Sliding deep inside of her he buried his hard and aching erection into her. Janie grabbed his ass and held on tight, thrusting her hips with his every movement. Their passionate dance gained momentum, building their climax quickly. Janie threw her head from side to side, moaning her pleasure as she bucked wildly against Caleb. She howled in pleasure as her climax rushed through her whole being and she wrapped her arms and legs around Caleb pulling him deeper inside of her. Caleb moaned, then grunted as he thrust his hips forward hard, abs taught and arms around Janie. He kissed her with all the passion and love he had kept bottled inside of him for her. Caleb moaned his professions of great love in her ear as he climaxed then collapsed on the bed next to her.

Oiy, that was racy wasn’t it…

Granted, the soft and hardcore was used in this piece. It was a mix of both to suit a particular niche of the reader. We have both because we have an experienced older male character coupling with an inexperienced and younger female (yes legal) character. So the back and forth of the softcore and hardcore word use is meant to show that differentiation between the two characters in the scene. It is to facilitate the shyness of the younger character compared to the more outwardly comfortable older character.

Reading a lot of articles right now that are focused on publishing rights makes me reminisce about... 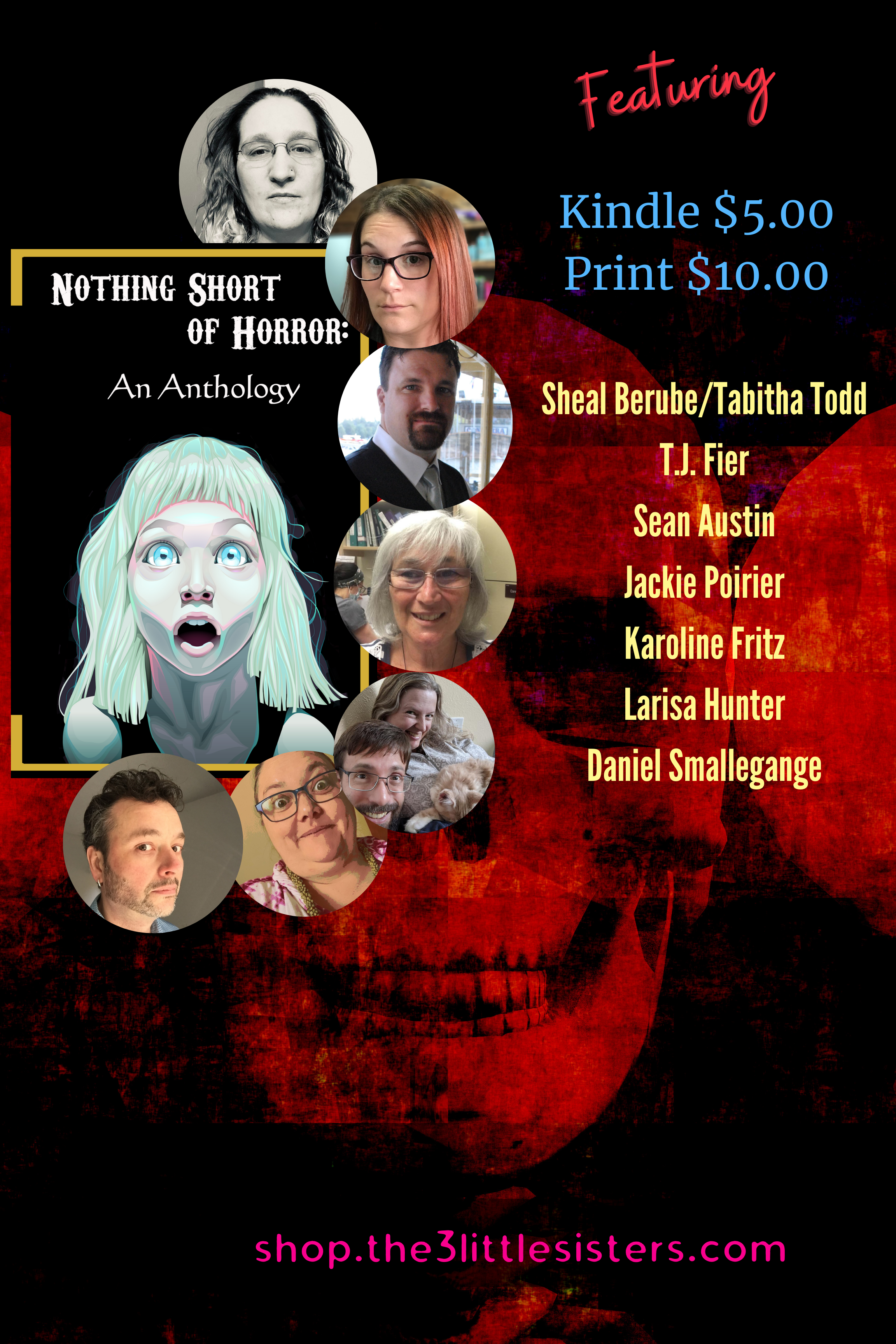 Nothing Short of Horror Anthology

Contents Nothing Short of Horror highlights some dastardly thoughts from the minds of our authors. Gathered by...

Educational leaders have an obligation to implement tools for societal change. The public school system was conceived...