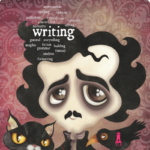 A Saucy Tale of Intrigue and Adventure: Junior Chalk

Long ago, before chalk was a basic classroom object, they were hard workers in the Congo rain forest producing food for the trees. The limestone in their blood gave the tree’s energy to grow, but in order to feed the trees, the chalk people had to sacrifice one hundred lives every five years. They were okay with it though, because it let everyone else live; it was considered an honor to be chosen.

One day a young couple, Mr. and Mrs. Chalk had a son who would change the history of chalk people forever. The boy’s name was Junior Chalk, he was always different from others, less sad, more optimistic. No one knew why he was like this, neither did he. Junior had dreams unlike the others, he had hoped for the future, but every time he would bring them up his parents demanded he stops talking about them.

A year from the sacrificial day, Junior was just starting middle school. He was nervous but knew his two best friends would be there. Misty Calcium, his neighbor of four years and deep down his longest crush and Donny Carbonate, his best friend since they were two.

‘’Junior!’’ Mrs. Chalk yelled from downstairs, ‘’you’re going to be late on the first day!’’

And off he went to what he thought was just going to be a normal day at school, but that wasn’t the case in Junior Chalk’s story.

Once at school, Junior quickly found his friends sitting by the main entrance of the large school that was carved into an even larger tree. Junior’s first class, which was all about the upcoming sacrificial day was his least favorite class. They learned all about the ceremony, being drained of blood and having it poured into the main river, the river would then bring the limestone blood to the trees. The class also learned that if chosen, it was an honor; their souls would have a special place among the gods. As Mrs. Grundy, the class teacher was telling her students about the founders of this holiday, she was interrupted.

Mrs. Grundy quickly answered his question, ‘’We must die so others can live.’’

‘’No, we don’t have to. There’s supposedly another source of limestone out there” Junior said confidently.

‘’That is just a myth, you should know that young man,’’ said Mrs. Grundy.

‘’That is enough of you! Keep your mouth shut or leave my class!’’ Shouted Mrs. Grundy.

Junior stormed out of the classroom followed by his concerned friends, Misty and Donny.

Patiently, Misty and Donny waited for Junior to calm down. “Careful Junior, I heard if you get caught asking questions, the government will come keep you quiet.’’ said Misty.

Suddenly, Junior shot up excitedly, startling his friends. ‘’I got it! I know what I need to do!’’

‘’What is it?’’ both Misty and Donny said surprised by Junior’s behavior.

‘’I’m going to find the source and prove everyone wrong!’’ shouted Junior, “No one will have to die anymore.’’ Surprised that his friends didn’t volunteer to join him, Junior frowned, he could tell by their facial expressions, they thought he was crazy. He said goodbye to his friends and went home to gather supplies.

When Junior got home, the first thing he noticed was that his mother’s dust mobile was still there. He wondered why she hadn’t left for work yet so went in to investigate. When Junior got inside, he began to look around, “Mom? Dad?” he yelled, ‘’I’m home.” but no one was home. Then he found a note left in the kitchen, it read:

We heard you were asking questions about the hidden limestone source, we don’t want that. So, we took your parents. If you want them back home safely, leave. Never come back. You have till the end of the night or we make your parents disappear forever. Do we have an agreement?

Just like that, Junior Chalk was gone into the night. While he set up camp somewhere just outside of town, Junior decided he’d still find the limestone; he just needed to figure out where to start. Then he remembered a story his parents had told him when he was young. It was of a prophet who lived in some caves down the main river. So, Junior went to sleep and started down the river the next morning.

After a day and a half of trekking down the river, Junior finally found the caves. As he ventured in, he called out for the prophet. Suddenly, a cloaked figure appeared out of nowhere.

“Junior Chalk, what can I do for you?” said the prophet.

“How do you know my name?’’ said Junior in a surprised tone.

‘’I know a lot of stuff. I know you want to find the hidden limestone and you want my help.” explained the prophet, “I can give you this magic compass that will lead you straight to it.”

“Yes! Thank you, prophet.” Junior said happily as he reached out towards the compass.

“Ah ah ah, you must know, all magic comes with a price. If you take this compass, you must give something to me.” said the prophet.

Junior hesitated for a brief moment then asked, “What is it you want?”

“Oh, something so small and insignificant,” he said, “how about that?” the prophet asked while pointing at a pendant Junior was wearing. “This is the only thing I have from my parents. What do you want with it?” replied Junior.

The prophet laughed and cunningly said, “Well that is for me to know, not you!”

Junior sighed and thought about it, “Fine.” then he slowly handed it for the compass in return, and he was on his way.

Two weeks of following the compass through the rain forest, it brought Junior to an ocean. He knew right away he needed to cross, but how? Junior spent the rest of the day trying to come up with a way to cross the huge body of water, but it was no use. He threw down the compass in frustration and sat there in silence. Then Junior heard something, it was a ship horn; Junior jumped up and ran towards the sound. Just as he got to the ship, it was leaving; he had to run as fast as he could and leapt onto the ship.

A month later, the ship finally docked in Quebec, Canada. Once again, Junior continued west to find the limestone. He snuck onto trucks and transports, switching every time they changed direction. After about a day of traveling, Junior was in a small town called Elliot Lake. He knew he was close, he could feel it.

Junior followed the compass the rest of the way; it led him to an abandoned mine, Stanley mine. Junior slowly went in and suddenly the compass started spinning in every direction. That’s when Junior knew, he found it, he found the huge source of limestone.

As Junior was just about to go home and tell all his friends and family, he remembered his parents. He remembered he couldn’t go back ever. Saddened by this, he broke down, he missed his parents, he missed Misty and Donny. Then Junior realized, this is his chance to live his dreams, he wanted to help teach a class ever since he was young. So Junior quickly wrote a letter to his hometown with the location of the limestone, he told them they were free, they could leave; he even explained to his family that he was staying in Elliot Lake, and they can come too.

A month later, Junior had his dream job as a piece of chalk in an English class taught by a human named Mr. Abraham. Misty and Donny were there too, as well as his family. Everyone was free to live their lives, there was no more sacrifices because Junior Chalk saved the whole chalk civilization.[/vc_column_text][/vc_column][/vc_row][vc_row][vc_column][vc_cta h2=”Brianna Berube” h4=”Student” h4_font_container=”color:%23f25c00″ h4_google_fonts=”font_family:Merriweather%3A300%2C300italic%2Cregular%2Citalic%2C700%2C700italic%2C900%2C900italic|font_style:400%20regular%3A400%3Anormal” style=”flat” color=”grey” add_button=”bottom” btn_title=”More About Bri” btn_color=”juicy-pink” btn_align=”right” use_custom_fonts_h4=”true” btn_link=”url:https%3A%2F%2Fwww.facebook.com%2Fbrianna.berube.180||target:%20_blank|”]

Brianna is a shy and intelligent high school student in Northern Ontario. With one more year of high school she is making plans for a psychology degree in university. An accomplished writer, artist and photographer her aspirations are to help others be everything they can be.
[/vc_cta][/vc_column][/vc_row][vc_row][vc_column][vc_single_image image=”17089″ img_size=”medium” alignment=”right” onclick=”custom_link” img_link_target=”_blank” link=”https://www.the3littlesisters.com/insidescoop/”][/vc_column][/vc_row]