Ursa Major, also known as the Great Bear, is the third-largest constellation. Nearby is Ursa Minor, or Lesser Bear. Most know them today, however, has the Big Dipper, or the Plough, and Little Dipper. Known to several cultures, this constellation contains the northern pole star, Polaris.

One myth surrounding this well-known constellation is of Roman origin. There was once a fair maiden named Callisto who grew tired while hunting in the forest and laid down for a short nap. The god Jupiter saw her and was awestruck by her beauty. Time passed and Callisto gave birth to a son. Jupiters’ wife, Juno, was sure that her husband had fathered the son and, in a jealous rage, turned Callisto into a bear so that no one would ever find her beautiful again.

Callisto’s son, Arcas, was adopted and soon grew to be a skilled hunter himself. One day, while he was hunting in the forest, Callisto spotted him and rushed over to greet him, forgetting that she was still in bear form. He assumed he was being attacked and fired an arrow at the bear. Jupiter caught the arrow, however, and decided that the only way to keep both Callisto and Arcas safe was to turn Arcas into a bear as well and fling them into the sky, where they formed Ursa Major and Ursa Minor. Other versions of this story replace Jupiter and Juno with Zeus and Hera.

One of the oldest recognized constellations, the legends surrounding Taurus the Bull date back to before the Bronze Age and span across several cultures. According to Egyptian lore, this constellation was associated with the renewal of life. When the spring equinox occurred, the constellation would be covered by the sun in the western sky. This “sacrifice” of the bull was thought to bring renewal and regeneration to the land. 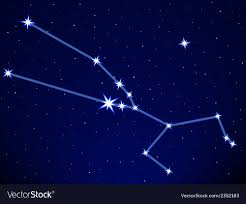 In Babylonian lore, the goddess Ishtar sends the bull to kill Gilgamesh for rejecting her advances. Enkidu rips the bull apart and flings the parts into the sky, creating both Ursa major and Ursa minor. Greek legend identifies Taurus with Zeus, who shape-shifted into a bull to kidnap the princess Europa. Another version of this tale is that Zeus turned his lover Io into the bull to hide her from his wife, Hera. 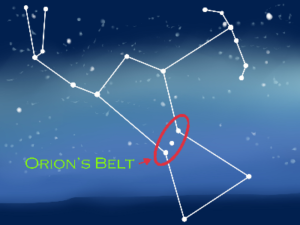 One of the most well-known constellations, Orion contains the most prominent and recognizable star patterns in the night sky; Orion’s Belt. It also contains several nebulae and two of the ten brightest stars. This constellation is known throughout several cultures; Orion’s Belt is called the Three Kings or Three Sisters in South Africa, the Three Mary’s in Spain, and Fire Drill to the Aztecs. For other cultures, such as the Hittites and the Hungarians, the constellation was associated with great hunters from their lore. In Scandinavia, the constellation is associated with Frigg’s distaff.

But it is more commonly called by the name of the famous Greek hunter, Orion. Described as exceptionally handsome and tall and armed with either a large bow or brass club, he was the son of Poseidon, the sea god, and Euryale, the daughter of King Minos. There are several versions of how this grouping of stars came to be named after him and most of them involve women.

In one version, he fell in love with the Pleiades, the seven daughters of Atlas and Pleione. His pursuit of them was frowned upon by Zeus, so he scooped up the seven sisters and flung them into the sky, where they now reside in the constellation of Taurus. Yet another tale involves Artemis, the great huntress, and her brother, Apollo. Artemis had taken quite a fancy to Orion, you see, and Apollo was having none of that. So one day, they came upon Orion while he was bathing in a lake. Apollo spotted him first and challenged his sister to a demonstration of skill: to hit a target floating far off in the water. She accepted, not knowing what that target was and her arrow landed, killing Orion. She was so distraught when she found out that she had killed the object of her affections that she placed him among the stars.